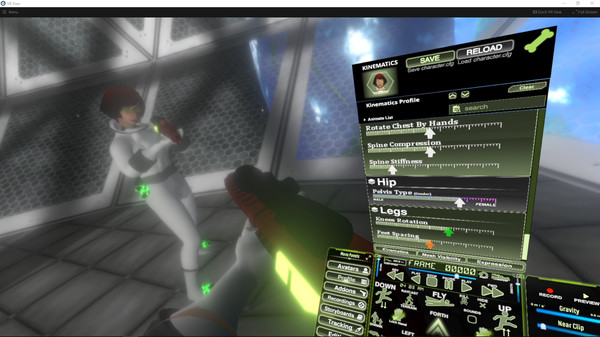 Motion Capture Fusion [VR] is an immersive roomscale mocap sandbox for artists and animators who wish to create and export motion capture animations, or create live content, using conventional VR hardware. With as little as a single VR HMD and two controllers users may create mocap on their own avatars. Advanced users may create more detailed motion capture including full body tracking and can be combined with other sensors (eg. Apple IPhone Truedepth sensor and Oculus Quest 2 optical finger tracking) to connect avatars to simultaneous inputs. This fusion of multiple sensor can combine many layers of motion capture in a single take; including: full body tracking, face capture, lipsync, gaze tracking, optical finger tracking.

Highlights
The term “getting into character” may apply here as literally connecting one’s self to an avatar as completely as possible and seeing them selves in a (VR) mirror while acting out a script.

Users may include their own completely custom characters (avatars) and use the same avatar throughout the production workflow. This eliminates the need for retargeting and ensures the mocap data always fits 1:1 without causing any offsets in the final results.

One of the unique features of Mocap Fusion is that it has the ability to export motion capture data and reconstruct the scene in Blender, making it available for final rendering in minutes.

Gameplay
The experience depends on the user’s PC and the tracking hardware used. The recommended SteamVR headsets are the Valve Index or the HTC Vive. A Quest HMD may also produce reasonable results. It is also possible to use the software without an HMD (eg. when livestreaming). Full body tracking is only available when using feet and hip trackers (and optional elbows, knees, chest). Users may achieve more realistic tracking results when using body trackers. Body trackers are optional and standing mocap is supported. Further realism my be achieved on compatible avatars by also enabling face capture or using a Vive Pro Eye for gaze and blink tracking.

History
Originally this was designed as an intuitive way for users to create virtual training videos and presentation in an immersive VR environment for added realism and then export their animation for rendering. The project was made available to a community for beta testing and since has received feedback and many feature requests which has helped add to the utility of the software for a verity of different creators.