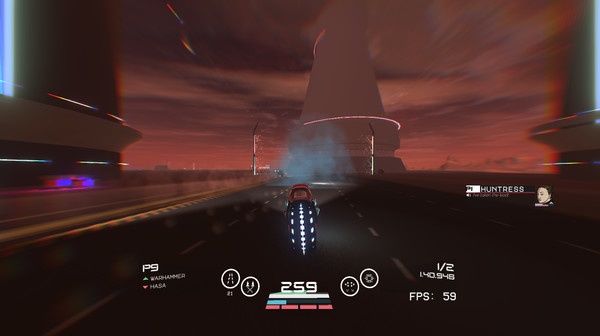 Phaseshift is a sci-fi combat racer with cyberpunk aesthetics, inspired by all the amazing 90’s and 00’s racers during that period. Fast paced, frantic racing action with intense strategic combat.

Strategise your loadout
Select your vehicle’s loadout with four ability slots, each have an important role offensively and defensively. All weapons have strengths and weaknesses; Guided Missiles are accurate, pack a punch but can be shot down easily with a Defense Drone. Bouncing Bomblets can pepper an area with unpredictable explosive ordence, but can be batted away with a Forcefield. Choose your loadout wisely, with 14+ abilities to choose from!

Five different environments
Race across five vastly different locales, each with destructive and interactive environments. Use track hazards to your advantage to trap opponents and force a mistake. Blow up volatile trackside objects for big damage.