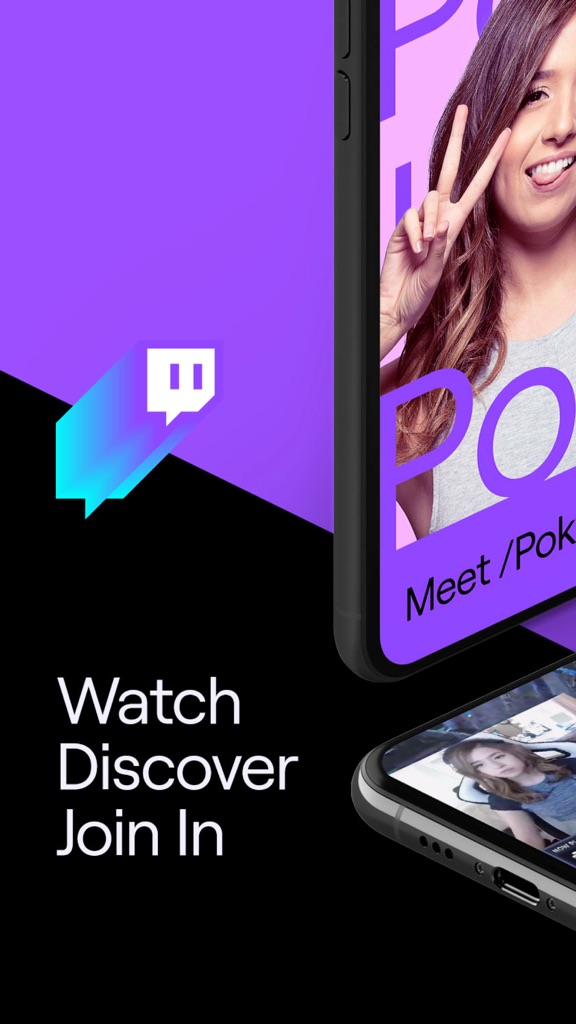 Experience the games you love like never before! Watch live streams and chat with devoted gamers around the world.

Catch the action as it happens! Access all the content you care about, from frenetic Overwatch multiplayer matches to soothing Bob Ross art demos. With millions of unique streamers every day playing everything under the sun, if it’s worth watching, it’s live on Twitch right now.

1. Watch live videos of your favorite games, from blockbuster titles like Minecraft and League of Legends to little-known indie gems.
2. Connect with other gamers in real time with full-featured live chat.
3. Go live with a touch and share your passion with the world!

Be a part of the leading social gaming platform on iPhone and iPad! With esports events, art, cooking, music and much more on demand, there’s something for everyone on Twitch.

Join the millions of hardcore and casual gamers who have found a place to connect over the games they love. Take your passion to the next level with Twitch!

For feedback and assistance, please visit our Support Center: https://help.twitch.tv

I love twitch it’s my favorite app I use and today it started where it will open the app but whenever I click any stream it won’t lead please get it this fixed ASAP.

This app is trash, load times are literally awful and it’s constantly freezing. God forbid you close the app then try to go back to what you were watching without having to wait an hour for it to reload the entire video.

Idk if its twitch or my internet but I’m always like behind on my laptop it works just fine but my phone it’s always behind.

If you play video games, then this is the best app for you to watch streamers

Literally everytime I want to watch the stream it gets loaded with long ads and once it’s done the time delay is horrible. I tested it on my computer and the time delay is wayy way better on a non mobile device.

Anything over like 10k viewers and it just black screens most of the time. No audio or video.... Good for small viewership.

Literally have done everything I can to fix this and nothing has helped. Contacted support and got no help on the matter. I’m just not allowed to add my friends audio to my stream whatsoever

Is there anyway for you guys to do something about those 30sec delay? Can It be fast like YouTube where there’s no delay? And mods on mobile; can you guys take out the reason to ban someone on stream? Like it says “reason” instead of taking forever just to ban someone. Thanks Twitch, it’s a good app but just hate the fact of 30sec delay.

it’s pretty good and I just got it yesterday

One evening I was watching a show through my phone connected to a smart speaker and the sound cut out. Nothing on my end changed. I have no idea what happened and can no longer listen to my streams. It may not be twitch’s fault, but I cannot figure out how to fix it. All of my other apps still play through my smart speaker

i cant even login i tried doing the stupid captcha thing, answered correctly 10x and still asks me to verify

When I was watching twitch on my pc I wanted to download this on my iPad then I did but I HAVE TO BE 13 YEARS OLD!? Your just making this fun for 13 year olds and not 6 or 7 year olds this is just like among us deleting this

The app simply doesn’t work. I downloaded it to keep an eye on my chat while I stream. However, it only worked for the first 40 minute test stream. Now when I open it, it fails to load anything at all. Everything works fine when I open it on chrome or safari on iOS. Can’t chat with my viewers, can’t do much of anything but view stream stats and notifications from the browser. It’s basically a useless site/app as long as I’m on my phone, leaving me with no option but using my laptop as a secondary, which is the most undesirable thing, as it’s a complete potato.

Twitch was not made for phones Streams Lag so bad I have to spam the unpause button just to get in stream and I just bought this phone. Pls make the phone version better but the computer version is AMAZING great quality no bugs

Www.twitch.tv/ogpardon follow to come check out my next days stream everything is getting wild I’m having so much fun playing it and I want to see you in the next stream thanks to twitch mods and creators thank you

Twitch is a place where you can make livestreams, it’s good but I don’t have that much interest in it though. It’s super hard to get views one you start your first. I mean I get you can’t get views that quick your first time but this app takes it to another level. You can disagree with me but that’s all I have to say for third review, have a good day.

I would give it a higher rating if I could watch videos. Whenever I click on the unpause button it doesn’t unpause

Didn’t get past Sign up because all my passwords are “too weak” Deleted.

A great place for Millennials and Gen X. Way too much profanity and juvenile delinquents looking to become demigods. I’d advice anyone with any semblance of taste to avoid this place.

Can we please fix the app already. Lower the latency number 1. Then still when I’m scrolling down my followers and get to the and next is recommendations it hangs for a second. When you’re in landscape and hit the subscribe button the stuff is shifted to the right. Lastly just want to see this app improve.

I can not unsubscribe from the channels that I purchased tokens from on mobile. Yes I’ve tried going to the website but it just says “To edit this subscription, please go to your Subscription Manager on your iOS device”. Well, I do that and nothing comes up except “extend”. Why is this unnecessarily complicated????

This app has so many ads now it’s a joke. Imagine first getting on this app opening up a stream and watching 2 minutes of ads then switching to another streamer right after the ads end, just to watch another 2 minutes of ads. The amount of ads has completely turn me off to twitch now. Another big company ruining services. Google ruined YouTube now Amazon has done the same for twitch, remember back when you could pay to not watch ads at least you can even skip on YouTube. The rest apps quality besides ads is what you would expect to see from a large company like Amazon.

I LOVE THE DREAM SMP

Libba brings delight to my day with her original songs, covers and digital creativity

Imagine watching 2+ hours of buildup for one moment and then you get Ad 1/4 00:30(this happens often). Twitch no longer has any real competition for their product so they are starting to abuse their monopoly. They have added a ridiculous amount of ads to their platform since mixer failed, and they are countering ad blocks. Also, they play the same ads over and over. I have seen the same 3 ads (indeed ad with twitch girl and blue diamond almond play nearly every time) 50 different times while rarely seeing any new ones.

Please can you fix: when you hit pause in order to get a screen shot, you cannot dismiss the pause overlay and get a full screen shot. It's almost impossible to time a screen shot while the video is playing, especially when you have to keep going back and forth to get to the right spot.

Ok, It’s a great app, but whenever I stop streaming my stream never saves and it’s annoying. Pls fix

I don’t understand why when there’s an add IT HAS TO BE THREE TIMES LOUDER THAN THE STREAMS.

I have twitch but for some reason it doesn’t let me see anyone’s stream.

I can watch my favorite streamers on here.

The app works fine on data, but once you go to WiFi, it just doesn’t want to play the stream

This is a great streaming app to get streamed sniped

I think that this app is generally good, though there is a significant delay when watching on mobile vs on pc. This isn’t a major problem and isn’t a very big deal, although it can make chatting harder. Also, I wish that there were more channel setting on mobile because it is somewhat hard to navigate through all of the menus, and there aren’t many options when attempting to edit a channels page. Other then these few minor issues, the app is very good and runs smoothly for me.

There’s a glitch that every time I join a discord voice chat and I go back to my twitch the screen is black and I can’t see the stream anymore pls fix this.

Several instances where I hop on the app to watch people stream. And regardless of wifi, 5G, service, etc it will not allow me to click the play button and watch. The chat works and updates real time but I cannot watch the live video of people I follow. I hit the play button and it just never changes or does anything no matter how many times I hit it. I have restarted my iPhone, closed the app and reopened it, I have the latest update. Not sure why this keeps happening.