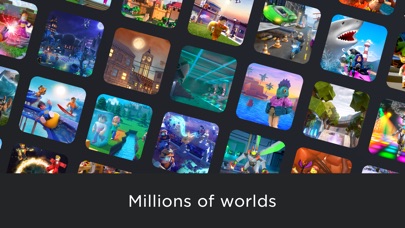 To make Roblox work better for you, we deliver updates regularly. These updates include bug fixes and improvements for speed and reliability.

Roblox is the ultimate virtual universe that lets you play, create, and be anything you can imagine. Join millions of players and discover an infinite variety of immersive worlds created by a global community!

MILLIONS OF WORLDS TO EXPLORE

In the mood for an epic role-playing adventure? Want to compete against rivals worldwide? Or do you just want to hang out and chat with your friends online? A growing library of worlds created by the community means there’s always something new and exciting for you to play every day.

Take the fun on the go. Roblox features full cross-platform support, meaning you can play with your friends and millions of other people on their computers, mobile devices, Xbox One, or VR headsets.

BE ANYTHING YOU CAN IMAGINE

Be creative and show off your unique style! Customize your avatar with tons of hats, shirts, faces, gear, and more. With an ever-expanding catalog of items, there’s no limit to the looks you can create.

Hang out with friends around the world using chat features, private messages, and groups!

Hi , I really love roblox I for one think it is the best game ever also I think they should make welcome to bloxberg a free game

I think it’s fun and all but you needs this fixed sometimes there tags and you can’t tell the people what your trying to say also another thing is sometimes it gets like he kicks people at the game last thing is your account gets hacked which has happened to me and I hate it but enough of that I think roblox is really fun and entertaining. 💎💎💎💎

It’s amazing I just wish I had Robux

I LOVE ROBLOX I have been playing it for 5 years now and it is AMAZING you can text your friend join you friend play with your friends and there is a lot of games to! and the 1st best game in roblox is adopt me plz play roblox it is the best

I did this to get my robux

So I was thinking for Roblox avatar should be like a human but Roblox stuff. So that Roblox looks better.

I’m 17 and my brother and me still play Roblox since like 2013! My brother is 19 And I know youtubers that are older that play roblox too and young ones! And you can do literally anything you want It’s better than a sandbox... it’s Roblox!

I’ve been playing roblox for many years and I love it. My only issue is that it stays on the loading page for more than 5 minutes. It keeps saying “loading save” on adopt me and it won’t load. I am very unhappy.

I play roblox everyday. But I think the robux is a little pricy so maybe make it cost a little less? I also think adopt me should get banned off roblox and nobody plays it anymore. It has crashed the game multiple times and I’m getting annoyed. Also the oders. (Online daters) that has gone crazy!! There are oders in every game I go in to! Also the bullying. I got bullied by some girls that DONT even know me! The said the face I had on was ugly! (I left the game). (that was wrote about a month ago) i have a new opinion on roblox. me and my sister almost got kidnapped because of this game. i dont play it anymore, i also don’t recommend it for kids under the age of 13. kids younger than that are irresponsible and dont think about their actions. there for thats my opinion on the game. thank you. 🙏🏼

I’ve played roblox for about 3 years now and so far it’s been such an amazing app. It’s very addicting to play once your good at it. What it needs to fix: 1) Robux Price: My friend plays roblox, but she can’t afford roblox because you overprice the robux. I have OBC and even for me it’s WAYY to expensive and I think you should consider lowering the price so it’s more affordable. 2) Tag system: Lets say your trying to say an ID code for music, or your trying to ask someone to call 911 for you in Roblox, all the numbers tag. I understand your trying to protect people’s personal info such as; Phone numbers, age, address, etc etc. But not EVERYTHING needs to tag out. Let’s say your saying a whole paragraph of writing in Roblox and there’s one word that isn’t allowed in that paragraph, the whole paragraph would tag out because of one word. 3) Report system: I think a lot of people would agree y’all need to fix this report system ASAP. There are so many cyber bullies online who mentally and can even physically threaten, or hurt someone’s feelings. Whenever anyone repost something like that you never take the time to even look at one single report. You really need to fix that. You lost a star because of these 3 reasons. Thank you for listening :)

Y’know this game has been a thing for a long time, and you know what? This game is ASWOME

I like Roblox. That is all I need to say.

roblox is the best it’s very fun and addicting

The games great but you should earn robux for playing games I’m not kiding nothing else is wrong as the title Yaaaa! It’s great!

This a good game to play

So ROBLOX it’s an epic game and I play it for 8 hours every day one problem though numbers and names get tagged I know u tag numbers cuz u don’t want ppl telling age but seriously it is so annoying and I try and get a person’s attention but in stead it comes out like this:############## sooo yeah that’s my problem with ROBLOX but over all it is a completely awesome game thank you -donutlover3652 2year ROBLOX player

Royal high is a awesome game but it’s sooo laggy that most of my friends can’t get in beucase of it and when you make a wish at the fountain sometimes it takes your money and it’s very aggravating and allot of my people don’t like it I made a tik tok and over 1M people commented that they hate when the fountain takes your money it’s such a throw off .

its so much fun and I love it so much

When you play on phone and when you leave it takes you out of the game and I don’t like that because when im doing something important and I get a text and I need to answer it then it will make me leave!

I’ve been playing for 4 years. I like to use the game as a way to show off my inner self. I don’t really like the safechat because what’s the point?? I like to talk about kpop and anime, but I can’t even say their names.. They’re not curse words. Okay but for the numbers, I think it’s reasonable. ROBLOX doesn’t want you to reveal your age or put in your phone numbers. That’s the only part of safechat that I think is okay. Also, people have found ways to curse, along with making inappropriate pieces of clothing. For example, a shirt says “Send Rudes”. Then make a tshirt that will cover the R in Rudes with N. Like ROBLOX, really?! If you’re going to make a kid friendly game, at least be really really considerate!! Also, people get warned over absolutely stupid things. I send a photo of my favorite kpop idol Min Yoongi from BTS. It gets moderated when it’s just a photo of him sitting on the ground looking at the camera. But yet, you let a photo say “Daddy, I need you” Like what?? ROBLOX is fun and all, but it needs a lot of change in the chat and the moderation system...

You guys are my favorite game in the world sure I sometimes dont play roblox but thats cuz roblox isnt the game i only play other games and y’know things keep it up! Cya!

I have been play I gotta play Roblox every hour it is a. Good game

It the almost best game ever

I think this is a great game honestly if you don’t want your kids to get it you should because there’s 1. Millions of cool/good games 2. There’s filters so that your kids don’t learn bad words and 3. You kid can’t technically be “cyber bullied” because bullying has to happen every day and you have to friend someone to be able to see them a lot. That’s why you should let your kid get it. Now I also wanna say if your kids server isn’t working don’t come over here being a Karen saying I WANT A REFUND BECAUSE MY SONS ROBLOX ISNT WORKING that’s not how it works cause you probably just have really poor connection as it says when it disconnects you also if your kid gets hacked cause they went on a free robux game DONT BLAME ROBLOX here’s another thing DISIPLINE YOUR KIDS RIGHT if you find them on an inappropriate game don’t be all “oh little jimmy it’s fine its roblox’s fault your not in trouble” NO it’s not roblox’s fault you can’t accidentally click the play button you also can’t get mad if little jimmy gets hacked There you go a ten year old just brought you down to earth BOOM Edit: hey I mean it’s a good game but I think I got hacked maybe I keep getting signed out and it keeps saying the game was launched on a different device help! L