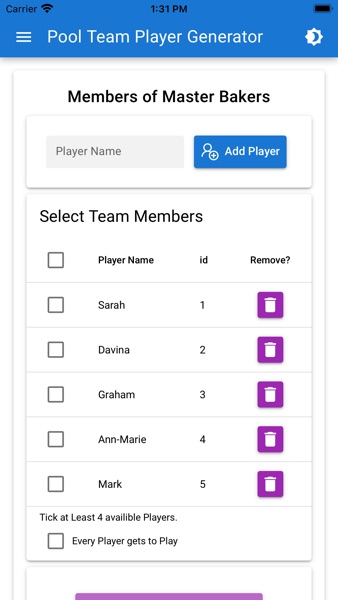 Fixed a stupid bug with ticking AllPlay in the Player list

The Pool Team Generator app was designed for the purpose of generating the playing order of Pool Team Members Randomly, for Singles and Doubles Matches.

Once you have added players, you can generate up a random list of players, that can be used in Match Play.

We created the App mainly for the purpose of randomly generating a Team list for The Basingstoke & Deane Invitation Pool League, but could be used in other Leagues.
Instead of using straws or playing cards to generate a random order of who gets to play the first game in a pool match, Pool Team Generator will take the list of Team Members and generate a random order of play for Singles and Doubles Games in a Pool Match.

Sometimes we all have more than enough players for a match, the App will allow you to select the players that have attended and it will make sure each player gets to play at least one game for that match.

The beauty about Pool Team Generator, is that once you have generated who plays and when, there can be no argument from fellow team members.

Once you have generated your Teams order of play, you can save that order and refer to that order at a later date.

The League I’m in, requires a minimum of 6 players to play a match, as we play 6 singles games and 3 doubles games per match, and on match night, it may not be possible to play with 6 players, if some have to isolate, so our league decided that we can play with a minimum of 4 players and 2 of those 4 can play another singles game, providing it has been randomly decided before the start of that match.
Pool Team Generator will generate those who get to play again.