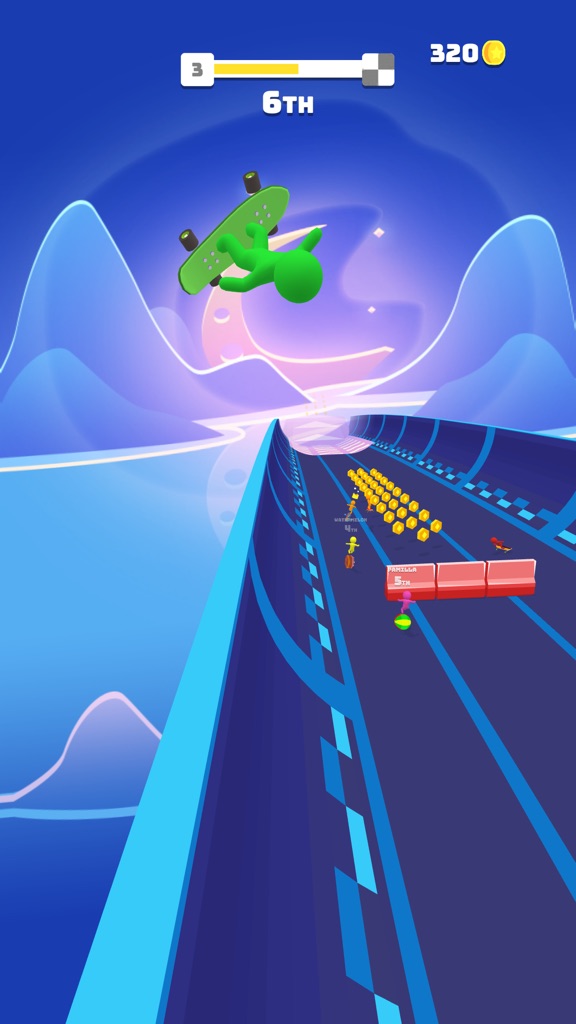 Race and compete with other opponents in awesome tracks with different obstacles and ramps.

Be the best of the best and beat the rest!

Ok, I love this game! But please make the videos go away! It’s very enjoying. I’m sorry it’s short, but I don’t have many thoughts about the game other than amazing, awesome, epic, and fun! You guys did a great job making the game!

This game is awesome I love it but one thing that’s confusing me is that in every round there’s a monopoly dude. He’s in every round I play and I don’t think other people have time to play all the time and he’s obviously super fast and programmed to do that. But other than that there’s not a lot of adds so that’s good. This is a great game I would totally recommend it even for the smaller kids and older kids.but every time I play I win witch is why I think I’m playing agenst CPUs which is why I think you should add a mode we’re you can play agenst real people. Please respond editors.

So I kill the guy with the golden skates all THE TIME Because he’s good! Is he a bot or a real person?

I❤️this game it is so FUN

I live on skateboarding and this games sort of helps me out!! Still... too many ads but GREAT!!!!😄

I just seriously hate the adds

I like this game but I get tired of it cause of the ads. The ads can get annoying and tiring. Tbh it’s ␈

This app had been a really good choice to download I love it and I’m so far in and it’s super addicting but the ads would be better to be not as much of them popping up, and the guy in the top hat and and the old people fancy clothes always is faster and if he dies or gets hit he teleports infront of you pls fix this thanks

This game is amazing its not a wast

This game is amazing it doesn’t have many adds at all. It is also super fun and it doesn’t take much WiFi at all. I love it bc it is very easy to win and it helps you a lot if you struggle in a level.

I love the game and it is awesome I wish I could be inside the game and it was great but it crashes on me while playing it but I found it really was fun and when you get uses to it that’s when the game gets fun and so much more fun and more challenging thing is the accessories . I hope you have a great time with the great game 🤩🥳🤗😻

I think this game is good for passing time but there are a couple things that I would like to change. 1. Whenever you win a certain amount of times you can get a new character or something like that, but in order to do so, you have to watch an ad. If you can win, then you should get rewarded without having to watch an ad. 2. When you get the chest, you can't get the "big" prize without watching an ad. I pick middle every time when I get the chest, and I've probably open around 100 chests and I'm not exaggerating. The one time that I didn't pick middle, I watched an ad to get more keys and guess what, it was in the middle. So the chests are rigged. 3. Last but not least, you should be able to get more coins in the actual race. If I race like 5 races and then do the bonus level, I can only upgrade like 1 thing, and I'm only at like 120% for my upgrades. All in all, this is great game, but these things really annoy me. It would make this game better if you could fix those problems. Thank you!

I had this game and I liked it but I deleted it and now I’m going to get it back because it is so good. I like the tricks and power ups.

The game is good but the steering needs to be fixed....game doesn’t listen to you

All you need to do camp the egle

This game is a walking add you get 10-30 seconds of the game then 45 seconds of an add every single time you beat a level this is one of the worst created games I’ve ever played.

On my old phone now I have a iPad the game is great!

Hello! So I really enjoy this app and its a total time waster. For example when im on a long trip or like a 3 hour drive I can just eat snacks and watch youtube. Youtube is a time waster also but— I feel like turbo stars is a really good one. I can just watch youtube, but I stop playing turbo stars after like 2 hours and watch youtube the rest. Here are the suggestions: 1. To much ads! Theres wayy to many ads. Like after I finish a race is boosts up the thing. When i click “No thanks” it just makes me watch an ad, so I would take that out. I know you want money but people won’t download the game if there’s too many ads. 2. Expensive items! The items in the game are to expensive like literally you have to grind on the game to get a good skin, so I would lower the prices. Those are all my suggestions, I really recommend this game!

Although it is fun game, after a few rounds it get old, and repetitive. There are adds at every turn, all of the “people” you are facing are ai generated, and the characters have awful quality.

It is great and all but a lot of ads

I love this game it is addictive and fun but simple. The ads are not a lot but the only thing I don’t like is that every ad loads fine but on the bonus levels when I choose an ad for the vip prize, it loads. All ads work but the ones that are useful. Other than that this game is the best thing I’ve ever seen :)

This game, at first, seems pretty fun. I was ecstatic to try it out. But then I played it. It was horrible, the steering, the EVERYTHING! Every time I press no to view the ads, it shows me them anyways. I might as well watch the ads, than click no. This game was a waste of my time. It's like any other awful mobile game I see on ads.

Because l win all the time

This game is amazing and I don’t see any problems with it.

This is stupid but fun

First, my fakery song is the cup song. Next my song is all of that and now thank you for all that you have done.

I love the game. I deleted the game because I had it for a long time . I’m getting it again but I can’t. I think you need to fix some thing.

Your game will kick me out of the app. I have used this app in the past and I had no problems but now I do

My only question is how do you switch the vehicle.

I have a little problem everytime i go to the app and open it, it just goes to a gray screen and then crashes. Idk whats wrong with it is it a bug or something if it is can you please fix it i wanna play this game agan.

This game is really fun! I honestly love the concept and everything, and I love all the skateboards, and skates and such (my favorite are the skates :3) Anyway, I’ve been playing the game for a while now, and noticed something kind of odd. It’s pretty small, not some gamebreaking glitch or anything. But me and my friends at first thought it was pretty funny! So, I was racing right? And I’m in 11th place, but that’s not what it says on the screen. Right up there, at the top, where is says what place you’re in, it says “11st”. And I’m like I don’t think that’s a number but it’s fine. So basically, great game, small issue, but it’s like, if they don’t fix it immediately or at all, the game still works so it’s fine with me!! Keep up the great work, Dev/Devs of Turbo Stars!! Sincerely, Jessiesuperfan P.S., I even got the latest updated version of the game and it’s still there! Just by the way. :)

This is a really fun game but I was wondering, how do you change vehicles? Every time I select roller skates or a monocycle it just makes me use a skateboard. Is this a glitch, or do I need to unlock them?

I played the game it was pretty good but, my biggest problem is whenever I was playing another game on my phone it said,”If you win you can go to Japan”. And like come on, you can’t tell people that especially if there’s kids there gonna get this games, but then there just gonna get disappointed , I mean idk it’s just a little messed up.