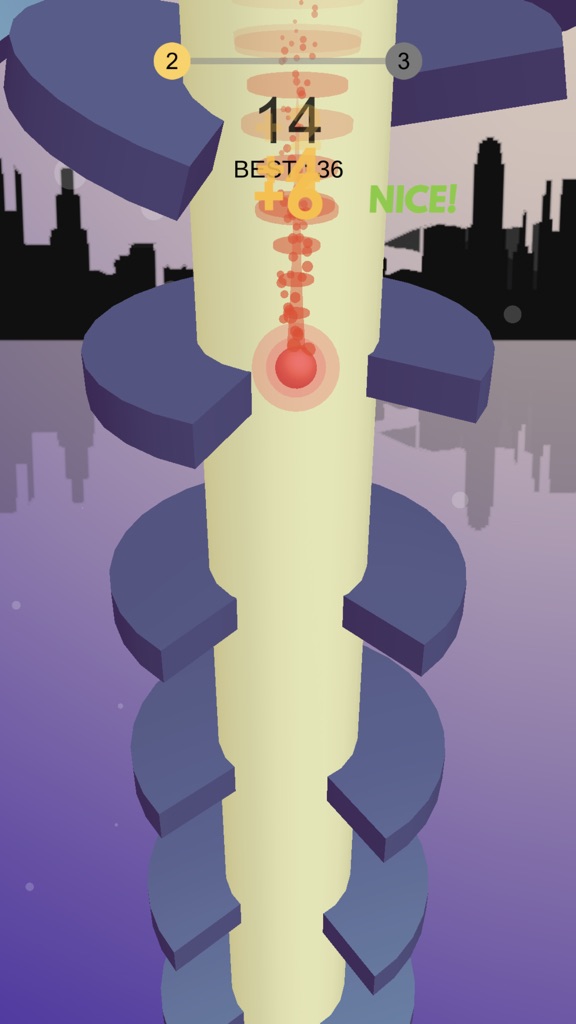 Exciting adventure of the bouncing ball through the helix tower labyrinth.

I love this game

I really enjoy your game. Keep it up

i luv this game but it’s glitching the latest couple days. like i open it and it just stops LITERALLY just stops and all i see is a red ball falling to the middle of my screen. so confused

Still lags even after update. Most features don’t work. Not worth all the glitches

Helix jump is a good and fun game. It does have its problems though. The levels don’t get harder and repeat the same levels. The treasure box used to give out characters but now it gives out coins. What are we supposed to do with coins?

This game relaxed me whenever I played I was calmed down.

It is very laggy I love the game it’s so addicting but it really laggy I don’t know if it me or the game have a nice day.

I think you should make the glitches better- and there is a LOT of bonus levels. There should be more regular levels.

This game is the best. I would of given it 5 stars just because it is SO addicting. I would totally recommend this to anyone who just needs to past the time and to someone who can be patient. I gave it 3 stars though because I am currently at level 414 and nothing has changed since level 1. There are no new obstacles and can get boring at times but usually very entertaining. I also gave this game 3 stars because I have SO many coins and I have nothing to use them on. I gain so many coins all the time but I already got all the figures. I am just collecting coins and I wish there were something else you could use the coins on. Overall, this game is so cool but needs changes such as, making new obstacles and having different ways to use coins. Thanks for reading and I hope the developers, who are reading this, can improve something I think should be improved.

MAKE IT STOP GLITCHING EVERY FIVE SECONDS TFFF i literallt have a 12 pro it’s your stupid games fault not my phone ok. FIX THIS LAZY

Horrible app. WOULD NOT RECOMMEND Horrible

this game is fun and stuff and I play a lot but there’s SO MUCH ADDS this is the most adds I have ever had,even when I’m playing it has adds and right after every round there’s an add it is not fun but other than that it’s fun game🤩

The game use to be so fun but all the updates that have been added has ruined it for me and I feel like if there’s a way to fix this it would be amazing make it how it used to be when you keep the score ever time you made it to another level.there are also a lot more ads and they ruin me while I play

It’s really good but extremely laggy at times, other than that it’s fantastic!! 👍🏼

So many adds. You die twice=Add Very addictive and fun otherwise

i personally love this game, other than the fact that there are so many ads!

Sooooo cool!!!! This game is a-maze-ing! How did you do all of this in one game cause I’m really really inspired to this app so much

I really love this game because ever since i first played it I am all ready on level 48.

i’v had this game on my grandmas phone and felt relaxed if this gets shown hi and plz download the relaxing,satisfying & fun game

Love the game the only thing I would change is the fact that there are so many adds but that’s basically it so if your looking to get it you should!! I’m very satisfied 😁

So my daughter wants to play on the go and she always see’s a red dot zooming in a black background and it’s very scary for her. so how i found out is going on the app

This app always glitches and moves our stuff like fr fr

Great app to play! But probably the problems. First ads. Like every 3 times fail the ad. That’s it

The game is so fun I love playing it whenever I have the time. It’s addicting! But the problems are that......there are way to many ads it’s like after every level there’s an ad. Also it’s lags a lot. Love but please fix my problems Thank you

This game is very fun and addicting. But something that takes the fun away, is the adds!! After every round you have to watch a 30 second add! It’s not fair. I know you want money but come on now. It just makes people want to delete your game.

I get during when I play the play the game and I get ads every 5 seconds. DO NOT PLAY THIS GAME!!!

I think you should add a glow in the dark level

This Game is too easy.

I really like it but I’ve been stuck on level six for days. Other then that it’s awesome five stars. ⭐️⭐️⭐️⭐️⭐️

Such a fun game 10/10 recommend some ads but overall great game!!

This game is fun-well if u can even play- but this game has so many ads I can’t even play the game. There will be an ad then I will get ready to play but then 5 more ads and you can play like ONE round every 15 minutes because of ads so hope you have a good round if you get this game and go through the “add jungle.”

So I think this is a really good game it’s well done and if you like a game where it keeps it simple then this is the game for you plus there’s a glitch with the arrow thing that breaks platforms underneath you but I won’t tell...

There r WAY to many adds

This game is absolutely amazing during lockdown me and my friend would see who can get the most levels up in ten minutes. We had so much fun. That’s how we had fun in lockdown. This game changed my life. It sometimes get addictive I love it! The quality is great! It’s fairly done! It gives the ads at a right point even though sometimes it’s annoying but awesome. Because some games gives ad each time you do something. If you say this is not this is not the best game then idk who you are oh now I do insane! I recommend to download even if your two! It’s just so good idk anymore words to explain how good it is! About ads The ads can sometimes get annoying. You can press watch ad to continue. Download I mean this is awesome definitely download if you don’t trust this try this yourself!